“The Westboro Baptist Church, a Topeka, Kansas-based independent fundamentalist ministry that Phelps founded in 1955, has been called “arguably the most obnoxious and rabid hate group in America.”

The Phelps Illuminati bloodline is so bizarre and has such a history of psyops since the witchcraft trial days that I had to put them in their own blog post instead of where I wanted to place them in the Religious Oddities section.  And btw – I knew zilch about them until yesterday.  Thank you Holy Spirit for the help.  Glory to King Yeshua forever!

Also, I added the pic of K aka “Just the Letter K”  because this is just one of many protest groups that are battling the Westboro Baptist church. 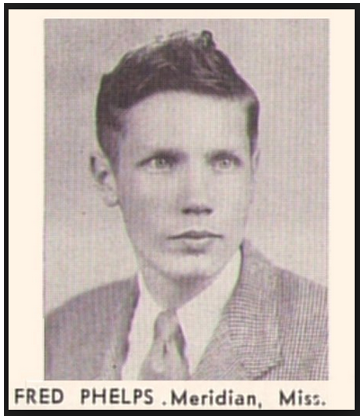 her daughter Sarah Bascom formerly Abbott aka Barnes b. 1704 married Comfort Barnes b. 1706 and his bloodline connects to Stuart, Jones, Keppel bloodlines to which all of these connect to Camilla Parker Bowles, the wife of Prince Charles. 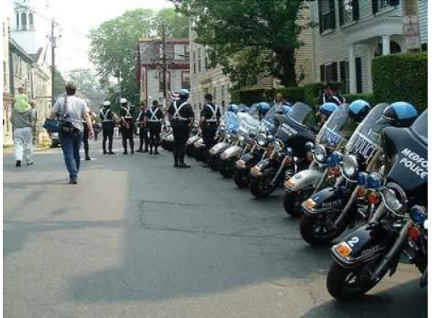 “…Second, the WBC attracted an enormous police presence. Riflemen were in buildings, there were armored vehicles, SWAT teams, mounted police, and police from several different towns. It was a “show,” being put on for the benefit of the townspeople. The massive display of arms was to reassure people that they would be protected from these fanatics. In fact, the police were there to protect the WBC and prevent a riot from breaking out.

Third, their presence is spun to reflect our “Freedom of Speech,” and how the government tolerates any sort of dissent… no matter how ridiculous it may sound.

Fourth, The people are led to believe that these people are “war protesters,” and many of the local papers described them that way.

Fifth, this fits perfectly with The Establishment’s ongoing effort to discredit all world religions in preparation for its eventual implementation of a secular State Religion, similar to Orwell’s prediction made many years ago. Remember that the Iraq War is now being described as a “religious conflict,” and this bogus explanation is used with great effect to disguise our true imperialistic goal of establishing a ground force in the Middle East to use as a staging area for further operations. The WBC provides the perfect “Anti-Christian” image to compliment the ravings of Pro-Establishment Atheist mouthpieces, such as Christopher Hitchens, who forward the theory that religious people are the real enemy in the world today .

When they notified the town that they were coming, there was no place to put them. There was simply no available space across or near the church, so the police decided to put them in a parking lot some distance away, where they would not be seen. Strangely, the State Police notified the local police, saying that the Westboro crowd HAD to be placed front-and-center, no matter how inconvenient. As the top photo shows, the local cops were forced to rope-off a tiny piece of the sidewalk for the WBC to have their protest. I thought it was kind of strange that the police went to such ends to accommodate these people. A special detachment of Boston Transportation Police escorted the WBC into town, where they were allowed to stay somewhere (no one knows where this was) for some time before and after the funeral. At the church service, people were not even allowed to approach the WBC protesters or exchange words with them. They received amazing police protection. They left several hours afterwards with full escort and at high speed, so that no one could follow them.

According to the WBC “Myth,” local law enforcement has to bend over backwards for the WBC, because the Church has the habit of filing all sorts of lawsuits against the police, the town officials, residents, and anyone they can. I think this is bullshit. These people are on constant “tour,” and may visit a dozen funerals in a week. Their travels are well-coordinated and they are in locations all over the country. How would it be possible for them to maintain nuisance lawsuits in all of these faraway locations? Also, why can’t the local police departments tell them that they are unable to provide adequate police protection for them? If some ordinary person showed up at one of these funerals with a legitmate anti-war message, or just stood outside Town Hall, they would be immediately arrested for disturbing the peace. I can’t imagine them winning any sort of lawsuit against authorities. It seems odd that throughout ALL the massive anti-war protests of the past that no one until Fred Phelps discovered that all you had to do was simply sue the police to make them treat you nicely.

And, who finances the WBC? The internet says they have over 100 members who all donate money out of their own pockets. How do they know this? Did Phelps give them this information? Fred Phelps was invited to BOTH of Bill Clinton’s Inaugural Balls. Huh? These people have this strident “Anti-Fag” position, but they support Liberal presidential candidates? Huh?”

“(Fred) Phelp’s endorsed Al Gore for the 1988 Presidential candidacy due to his opposition to a “gay bill of rights” and comments that homosexuality wasn’t something “society should affirm.” Phelps and his congregation later picketed the 1997 inaugural ceremony after he switched his opinions on gay rights. He also endorsed Bill Clinton in 1992.

In 1997, PhelpJs wrote a letter to Saddam Hussein, praising him for being “the only Muslim state that allows the Gospel of our Lord Jesus Christ to be freely and openly preached on the streets.” Hussein then granted Phelps permission to send a delegation to “preach the Gospel” for one week. Church congregates then traveled to Iraq where they protested the U.S. by standing on the streets of Baghdad holding signs condemning Bill and Hillary Clinton.

Attachment 1.  There is some info involving an incident of witchcraft that was put on Elizabeth Phelps Ballard b. 1646 the wife of wife of Joseph Ballard and the daughter of Edward Phelps and Elizabeth Adam Phelps. The info is below but first let me point out the bloodline connections.

The key here is that her mother Elizabeth (Adams) Phelps b. 1642, was the daughter of Robert Adams Jr. b. 1602 and he was the son Robert Adams Sr. of Trent & Lymington and Elizabeth Sharlon.

Robert Adams Sr. – “He is believed to come from Devonshire and to have been a son of Robert and Elizabeth Sharlon (Sharland), connected to the Ap Adam pedigree and through that connection to have been a cousin of Henry Adams of Braintree (Quincy), MA – the ancestor of the American Presidents, John and John Quincy Adams.”

I’ve learned that the Adam’s families bloodline comes from the most occult bloodline on the planet, the Merovingians,  The funny part of the Phelps/Adams connection is that another hate preacher Pastor Steven Anderson also is connected to the Adam’s bloodline. Please see my Religious Oddities for info on Pastor Anderson. 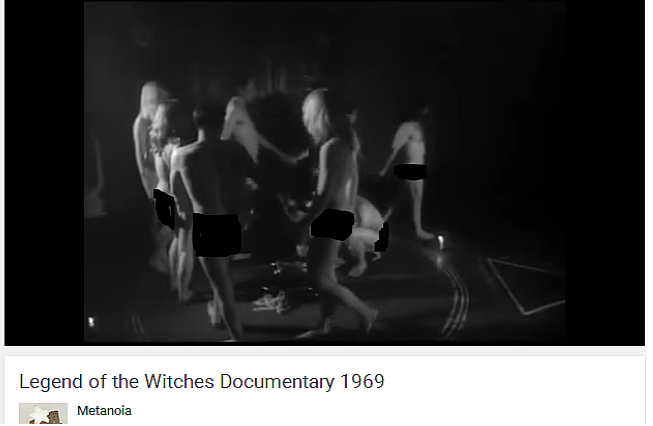 I put this pic from the documentary to show that in England they practice witchcraft like that’s a secret.

My opinion of this witchcraft incident below is that it was staged and I think that because Illuminati high royals were involved and by now you should know that are very creative at creating spectacular and dramatic events because money is no object to them and they have an abundance of wickedness running through their veins.

“*from Notes on the Ballards of Andover “Elizabeth Phelps, Wife of **Joseph Ballard, fell ill, and on the advice of some of the townsfolk, he was persuaded to send to Salem Village where, it was said, there were girls who could tell the names of those persons who were able to afflict others. Thinking he could discover the cause of Elizabeth’s sickness, he asked two of the hysterical girls to attend a meeting held at North Meeting House, in North Parish. As these girls were supposed to have been afflicted by witches, it was believed that they would be able to discover the person or persons afflicting Goody Ballard, since the presence or touch of a “witch” would send them into spasms. Various women of the parish were summoned to the Meeting-house and were blindfolded. Mr. Barnard, pastor, held a prayer service,& the goodies laid hands on the so-called afflicted-girl visitors. The fits followed. All the women were seized and throne into prison. The examination of Goody, Ann Foster, in July 1692, accused of practising witchcraft on Dame Elizabeth Ballard, was the beginning of the tragedies in Andover.” Elizabeth Ballard died July 27, 1692.”

I’m not buying this.

Twisting scripture again in Illuminati bloodline style. This pic below reminds me of the song from GEORGE THOROGOOD & THE DESTROYERS – (Then) Who Do You Love? 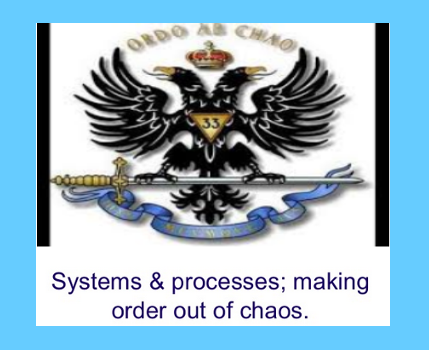 “Fred Phelps was excommunicated from Westboro Baptist Church before his death for having a change of heart about his religious beliefs and acknowledging the “Equality House,” a local LGBT support organization, as “good people.” (en.wikipedia.org) 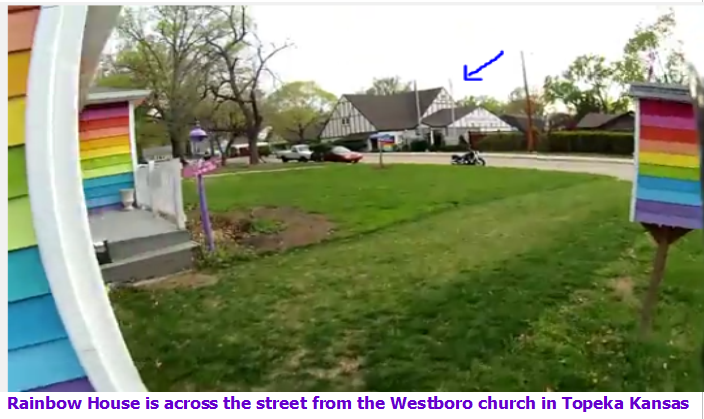 These New World Order out of Chaos Houses No. 1 and 2 remind me of the cartoon where they just check in to work, fight and then check out and go home.  Just more Illuminati theatrics to bring about the New World Order agenda.

This is a 40 second video 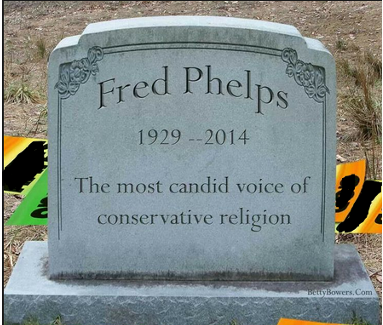 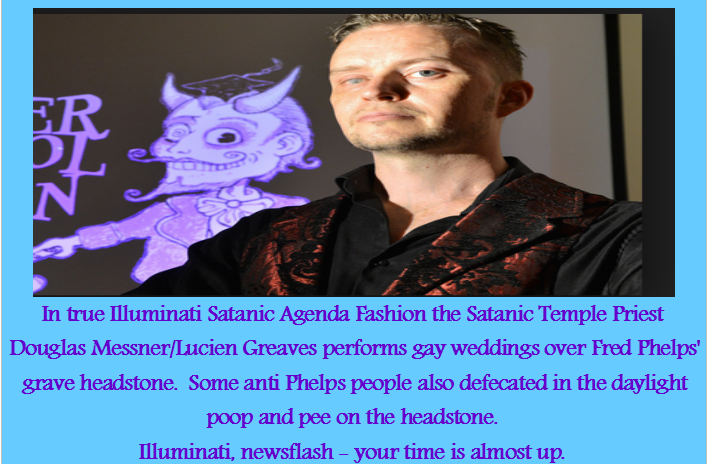 King Yeshua is coming and if you’re left behind don’t take the Mark of the Beast or you will never enter into heaven. 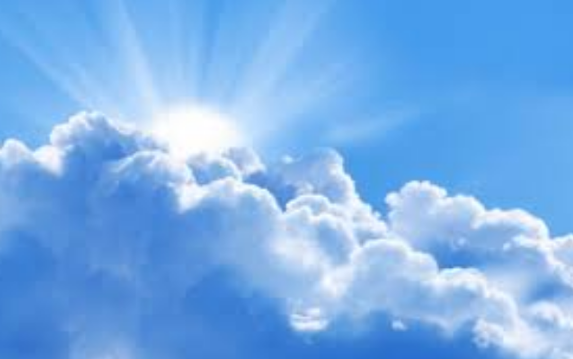