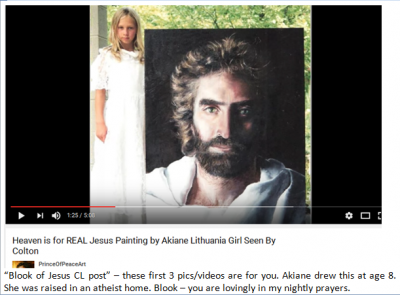 The first vid was taken down. This is a back up version and its about 10 min. long. Pastor Hitchcock explains: “The Judgment Seat is not to determine where you’re going to spend eternity but how you’re going to spend eternity. Our salvation is based on Christ work for us, rewards are based on our works for Christ.” Praying for others is one of the simplest things that you can do for God because he loves people and will be pleased that you love them too.

Yeshua/Jesus asked her to tell the people that the time is now.  Jesus is coming now.  The time has expired.

6 min. video with just music and words across the screen explaining rapture. Some people don’t believe in the rapture. I have to agree w/Boldsoja4Christ when he said “for those of you that don’t believe in the rapture, be my guest.” Meaning have at it. The bible says that there will be Tribulation (left behind) saints. Me I’m ready to go in the 1st go around with my King Yeshua. I don’t want you to have a spirit of worry around you. If you feel doubt and stress about the rapture just know that’s the Devil and rebuke it in the name of Jesus/Yeshua. It is by Jesus/Yeshua’s grace that you are saved and not by anything that you can do to get into heaven. Only believe.

The TRUTH About The Rapture – Putting the Scriptures in Context

Powerful testimony by this Jewish girl. She too had supernatural evil spirit experiences in her home which drove her to Jesus for safety.

Dead Boy Returns From Afterlife to Tell His Mom About Heaven

Texas Teen boy Zack Clements, Says He Saw Jesus When He Was Dead for 20 Minutes.

Dr. Maurice Rawlings – NDE – To Hell and Back

This is a great video about how the cop learned how to forgive.

This rapture parody on Christians is very harmless compared to some other videos that I’ve seen on YouTube. I myself get teased with: You’re still here? Do you have your bags packed? I hope that Jesus doesn’t come during my golf game or I’ve thought about that blood of Jesus but I’d just rather have a beer. I’ve also heard I can’t wait till those stupid Christians are gone or I’ll promote the chip. I don’t get angry because I know that they don’t see so I just pray for them. This guy once told my friend when we were out on the street passing out bible tracts about the Mark of the Beast, he said I don’t believe in hell and she responded you will when you’re burning in it. 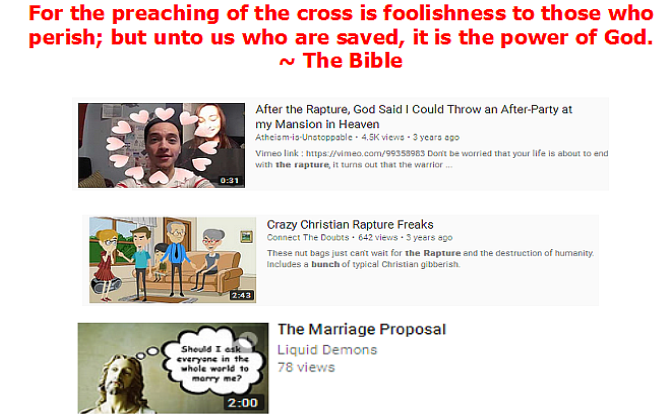 This guy is amazing.  When he was not saved he used to go into bars to pick fights for fun and then realized that he was empty inside.